A travel guide for the city of Porto in Portugal. I’m Chris and today we’re going to show you around Porto or as it’s called in Portuguese, Oporto. In this video we’ll visit the following eight attractions. We’ll begin with a visit to Porto’s famous port wineries, we’ll then take a ride on Porto’s cable car, we’ll talk about some must eat foods in Porto, we’ll visit Porto’s beautiful train station, we’ll climb up the top of a church tower for some great views of Porto, we’ll visit a Harry Potter-esque bookstore, we’ll take a stroll along the river and finally we’ll conclude by a visit to Porto’s Stock Exchange palace. Porto is Portugal’s second largest city. Lisbon’s the largest, Porto’s the second largest.

Porto is famous for its wine, port wine to be exact. The historic center of Porto runs across the river that runs through the center of town. The historic center, you can see it, just right across the river over there. The historic center for port wine on the other hand is on this other side of the river where the wine lodges are, and the Sandeman lodge is the most popular of these wine lodges. It is the most well known port wine company and this lodge has been here since 1850, virtually unchanged since then. You can take a tour through the wine lodge and sip a little bit of wine. Along the river front there are boats by each one of the wine producers that are reminiscent of the boats they used to use to transport the barrels of wine along the river.

One of the most famous lodges in Porto is the Sandeman lodge. This lodge has been here since the middle of the 18th century. It was originally founded by a Scottish man who wanted to import the wines from Portugal to Britain. The tours are 6 Euro, you can turn up and hope they have a tour in your language. We’re here in the morning at 11, they said we’d just missed an English tour at 10.30 and the next one’s at 2.45. Apparently Sandeman has two sister wine sellers and they’ll let you know when those have English tours. So the next English tour for us is at Offley at 12 o’clock and there is another one, the Ferreira just a little further down the street. So if you don’t find a tour at the one you’re going to, check out one of the other lodges.

After visiting the Offley Wine Lodge I will say that Porto wine has a Awfully high alcohol content. 20% to be exact. If you’re not interested in a tour most of these lodges have places where you can just sample their wine.

For a unique view of the wine lodges and the river front of Porto take the Teleferico de Gaia. The views are truly terrific on the Teleferico. Ba – dum – tish! It takes you from wine lodge country up to the top of the bridge near the Metro Station. Tickets one way cost 5 Euro or 8 Euro for a round trip.

The thing to eat while you’re in Porto is the Francesinha Sandwich, and it’s a quote sandwich because it is a sandwich because it has two pieces of bread. Inside of that there is ham, beef, linguiça sausage. On top of the bread is melted cheese, you can also get an egg on top and it’s surrounded by gravy. So it’s a sandwich that you serve with a knife and a fork, you eat it and then you have a heart attack. It is a really good sandwich, it was really quite tasty. It is something that I am not sure that I could have every day but at the two places that are famous and popular for the Francesinha sandwiches there is Lado B and right next to Lado B there is Santiago F. Both names that have single letters after them. Something that was interesting: we ate at Lado B because the line at Santiago F was too long. It was a really good sandwich but in addition to the meat sandwich they also have a vegetarian version that instead of the meats has soy, tofu sausage … I’m not even sure how you can turn this sandwich into vegetarian but they’ll do it for you.

Porto’s main street through the historic center is a big wide avenue that has the City Hall on top flanked by two roads on either side, reminiscent of Wenceslas Square in Prague. Even if you’re not taking a train into or out of Porto it’s worth a trip to the Sao Bento Train Station. It’s a very beautiful train station, actually I think one of the most beautiful on the inside that I’ve been to, the lobby area at least, because it was decorated with these blue Portuguese tiles from 1910 and they’re showing the history of transportation from horses to oxen to boats and even battles over there. You’ll find a number of historic churches dotted around the town with decorative Portuguese blue tiles inside and in this case, outside the church. That blue tile decoration outside occurs on more than just one church.

For some of the best views of Porto climb up to the top of the Clerigos church tower. The tower itself isn’t actually that tall but it is on the highest point of Porto making it a place for unobstructed views. You know, I say it’s not that tall because I haven’t climbed it yet. Maybe after I climb those 200 stairs I’ll have a different opinion. The total number of stairs, 197 to be exact. And actually the stair climb isn’t too bad. It’s slightly narrow but it takes about 10 minutes to get to the top, maybe even five if you do it quickly. It can be quite windy up here as you can see so make sure you don’t lose your hat. That’d be a long way down and I’m not sure if you would find it again.

After the tower stop by at the Livraria Lello, a bookstore that was founded in 1881 and it’s where people thought J.K. Rowling was inspired to write Harry Potter. It has to be the most elaborately decorated and designed bookstore I’ve ever seen and the staircase looks like something out of an M.C. Escher drawing. Very curvy.

The street right along the river, the Ribeira, or as I like to think of it, the Riviera. I don’t think that’s really what it’s called but I’m going to call it that for this video. It’s a great place to dine, there’s a lot of restaurants here. They’re the touristy variety, a lot of them have music. It’s a great place to buy souvenirs, hats, scarves, tablecloths and there’s even street performers. A great way to get your bearing on Porto is to take a river cruise. It’s a great way for an hour to get an overview of the city or it’s also a great way to get some exercise.

To see an interesting kind of “private Palace” in Porto, visit the Palacio da Bolsa, or the Stock Exchange Palace. This palace was completed in 1910 to be the Porto and North of Portugal Stock Exchange, built and owned by the Oporto Commercial Association. When the Queen allowed this to be built she required that they have a commercial court room where they could have court hearings about commercial procedures. The other interesting room they built inside is the Arabian room which was inspired by the palaces of Grenada in Spain. 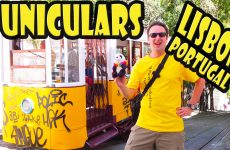 Riding the Funiculars in Lisbon Portugal 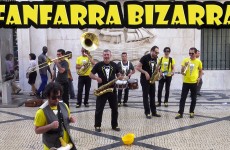 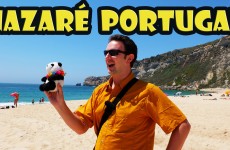 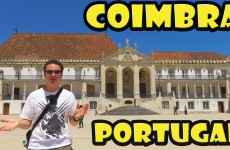 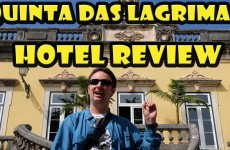 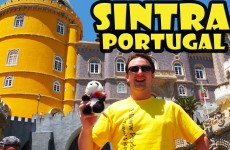 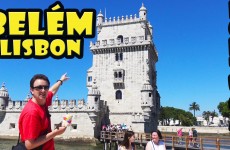 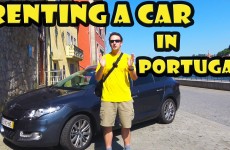 Renting a car in Portugal – Things you should know 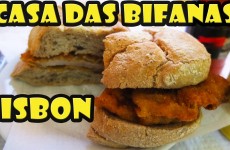